Turkey escalopes with ham and cheese 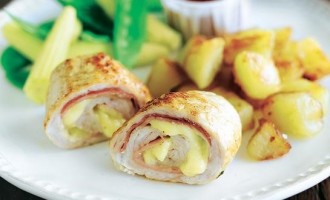 1. Pre-heat the oven to 180C/160C Fan/Gas 4. Put the turkey steaks, three at a time, between 2 large sheets of cling film and bash with a rolling pin until they are thinner.
2. Divide the ham and cheese slices into 6 portions and place on top of each turkey slice. Roll up loosely and secure with a cocktail stick. Brush the outside of each with a little oil. Set aside.
3. Cut the potatoes into 2cm cubes. Put them in a bowl and toss in the rest of the oil. Spread on a baking tray and cook in the oven for 25 minutes.
4. Meanwhile, heat a large frying pan and cook the turkey rolls for 3-4 minutes, turning, until lightly browned on all sides. Transfer to a nonstick baking tray.
5. Add the turkey to the oven and cook alongside the potatoes for 15 minutes until cooked through.
6. Serve with tomato ketchup, baby corn and sugar snaps.