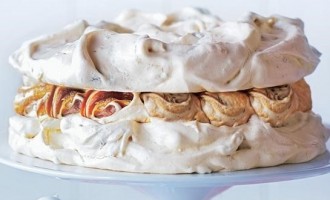 1. Pre-heat the oven to 130C/110 Fan/Gas 1/2. Line 2 baking trays with baking paper. Draw a 21cm diameter circle on each, then turn the paper over. Whisk the whites to form glossy peaks. Add the sugar a heaped tsp at a time, whisking until stiff again after each one.
2. Gently fold in the pistachios. Put a small spot of the mixture under the paper in each corner to stick it to the tray. Spread the mixture on the trays to make 2 rounds, using the pencil marks as a guide.
3. Bake in the oven for 1 hour 15 minutes or until pale coloured and crisp. To test if it is cooked, peel off the paper at one edge – if it peels off easily the meringue is cooked. Cool on a wire rack.
4. Heat 100g caster sugar in a small pan with 2 tbsp water until the sugar dissolves. Cook, without stirring, until golden brown, then remove straight away from the heat and add the butter to a small pinch of salt. Add 75ml of the double cream and stir until it’s evenly mixed.
5. Lightly whip the rest of the cream until it holds its shape. Fold in the toffee sauce with a spoon so you have the swirled effect.
6. Spread on one meringue and top with the other.