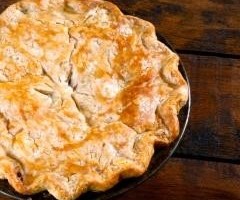 1. Preheat oven to 400 degrees.
2. In a large sauté pan heat olive oil. Brown chicken in pan, about 4 minutes. It need not be fully cooked yet.
3. Add potatoes and celeriac and cook 3 minutes, stirring often. Next add fennel and onion and cook until vegetables begin to soften and become translucent.
4. Add milk to the chicken and vegetable mixture. Sprinkle in flour. Stir until flour is well incorporated and slowly simmer to thicken, the sauce should stick to the back of a wooden spoon.
5. Roll crust to a thickness of ¼ inch and line a medium sized baking dish, reserving a piece of crust large enough to cover the top of the pie. Dock the crust with a fork and blind bake for 15 minutes.
6. Add the chicken and vegetable mixture to the par-baked crust and top with the other sheet of crust, removing the excess. Cut slits in top crust to allow steam to escape.
7. Bake pie for 30 minutes, until crust is golden. Let cool for 10 minutes and serve