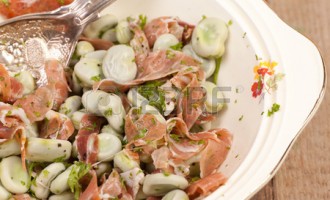 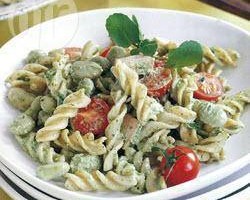 This quick and easy pasta salad is just right for busy people. It is appealing and sustaining and the watercress and walnut pesto dressing adds a great punchy flavour.

grated zest and juice of ½ lemon

Cook the pasta in a large saucepan of lightly salted boiling water for 10 minutes. Add the broad beans and bring back to the boil, then reduce the heat slightly and cook for a further 2–3 minutes until the pasta is tender and the beans are lightly cooked.

Meanwhile, mix together the tomatoes, ham, chives and 1 tbsp olive oil in a large serving bowl. Set aside. To make the pesto, process the watercress, walnuts and garlic together in a food processor or blender until finely ground. Add half the oil and pulse until combined, then add the remaining oil, lemon zest and juice and the yoghurt and blend again. Season to taste.

Drain the pasta and beans and immediately add them to the tomato mixture. Mix well, then cover and leave to stand for 5 minutes. Stir the pesto and chopped watercress into the salad, and then serve immediately. (If prepared ahead, add the pesto and watercress just before serving. Until then, keep the rest of the salad and the pesto, covered separately, in the fridge.)

For a vegetarian salad, omit the ham and add 4 chopped, hard-boiled eggs to the salad with the watercress. *Instead of broad beans, use 225g small broccoli florets. Cook them with the pasta in the same way.